Checks can be sent to:
Fountain Of Blessings
145 Country Club Drive
Tampa, FL 33612

Truly, Yeshua is the Passover Lamb.

On the road to Jerusalem

On the road to Jerusalem (Part 1)

On the road to Jerusalem (Part 2)

On the road to Jerusalem (Part 3)

El-Elohei-Yisra’el (Part I of III)

Having traveled from Paddan-Aram, Ya’akov (Jacob) arrived safely at the city of Sh’khem in Kena’an, and set up camp near the city…….. There he put up an altar, which he called El-Elohei-Yisra’el (God, the God of Isra’el). Genesis 33:18, 20 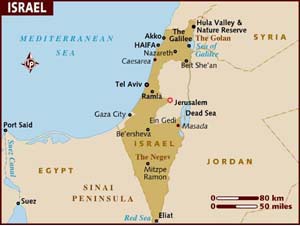 Why the fuss over Israel?

Israel occupies nearly 8,500 square miles, which is a bit less than 12 percent of the size of Washington and just a fraction of the land that Texas occupies. Why all the global concern over this small bit of real estate? http://www.theolympian.com/2010/01/09/1095544/why-the-fuss-over-israel.html#ixzz0mVJLGrWu

The sole answer can only be, God is the God of Israel. God is a global God, yet amazingly individualistic, making unique promises to and caring for every single person, while propagating a universal plan for all nations. So, He exclusively cares for me, and He cares for you, while He is working out a comprehensive, worldwide agenda with Israel being center stage.

Early in the account of the covenant family, we find that Jacob had made a vow promising that since God would watch over him on his journey, and bring him back safely to his father’s house, God would be his God. That is, he would submit to a personal relationship with the Lord of all creation who dynamically guarded and protected him.

On the return trip, God met with him along the way, in an encounter which changed his name and his fate forever. “Your name will no longer be Jacob, but Israel, because you have struggled with God and with men and have overcome.” The name Jacob symbolized struggling with men, Israel means he struggles with God.

So, here the nation of Israel received her name and her personality. This indeed foretold of a future of struggles with man and God. But where do we begin discussing this topic? God chose a clan through which to perpetuate a nation for Himself. And, He did not do it because of any inherent worth, but because of His great love. “I will have mercy on whom I will.” http://bible.cc/exodus/33-19.htm

Perhaps we will start by using Joseph as a prototype of what Israel was to be and become………..

This entry was posted in Yisra'el. Bookmark the permalink.
Submit a Prayer Request

For Email Newsletters you can trust